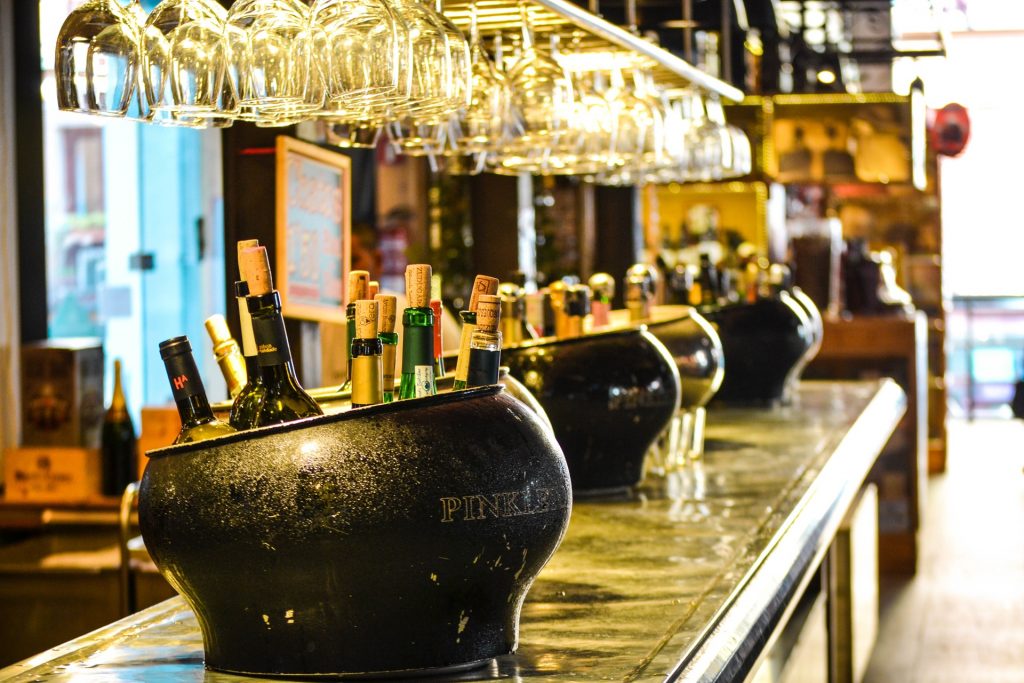 Serving temperature can have a profound impact on both the taste and mouthfeel of wine, so part of my getting ready to taste wines with customers is to figure out what temperature I want to serve them at. A consideration of the grape varieties and the wine style usually provides a good starting point, but there can be surprises.

Recently, I received several proprietary blends to evaluate from a new producer than I am working with. Because I didn’t know exactly what was in each wine I had to make some guesses about serving temperature and I, er, um, guessed wrong. Multiple times. As I was tasting through the sample bottles, I really started to feel a bit like Goldilocks… “This wine is too warm! This wine is too cold!”

There are many ways that temperature affects how we perceive wine. A cooler wine gives off less aroma than a warmer one. Because smell is a big part of taste, this changes both what goes on in your nose and what happens in your mouth. Make a wine too cold, below 40°F or so, and it won’t have much of any flavor at all (which, it should be noted, can sometimes be an advantage with less delicious wines). At the other extreme, as wine gets too warm (above 70° to 75°F), the alcohol starts to take over, masking the taste and giving an unpleasant burning sensation.

A lower serving temperature can give a wine more body and, on warm days, make a wine more refreshing. It also reduces the tongue’s perception of sweetness, which is why ice cream tastes great when cold but overly sweet when melted. On the other hand, acidity, bitterness, and astringency (tannin) are all more noticeable in cool wine than warm.

Commonly given advice is to “serve white wines chilled and red wines at room temperature.” This leads people wrong in a number of ways. All too often “chilled” becomes “straight from the refrigerator”, a temperature that is almost always too cold. Similarly, “room temperature”, especially on a summer day or when the room is the kitchen, is likely to be too warm. Even when it isn’t, many red wines will benefit from being chilled slightly below what most of us would consider a comfortable room.

As with many other things about wine, the right serving temperature depends on which bottle you have in front of you. The chart below gives approximate temperature ranges for serving red, white, and rosé wines. Richer, fuller wines will typically be best in the warmer part of the range. Lighter or sweeter wines towards the cooler part (with the combination of light and sweet served coldest). Sparkling wines also are served at lower temperatures as cold helps keep the carbon dioxide in solution, preserving the bubbles and keeping the wines from becoming too frothy.

When chilling wine, allow about 30 minutes of time in the refrigerator for every five degrees cooler you want to make it. If you’re in a hurry, use an ice bath– then you only need to allow about 2 minutes per five degrees. Wine warms up quickly in the glass, and it is usually a good idea to have the bottle just a little cooler than “perfect” to allow for this. If you need to warm up an entire bottle, plan for about 15 minutes per five degrees in a 70 degree room. (In a warmer room it will take less time.)

Returning to our narrative, the fairy tale solution of opening new bottles until finding one that was just right was unavailable to me, so I was just going to have to work with what I already had. The wines that seemed too thin or sweet I chilled a bit more. The ones that seemed odorless or flavorless I let warm up a bit. And when I went back to re-taste them all, things were much better.

The moral of the story is listen to your taste buds. (Well, that and… the bears should be truly thankful Goldilocks didn’t find the key to the wine cellar!) By taking advantage of the ways the temperature affects the perception of wine you can make it more enjoyable. Besides, your taste buds work differently than everyone else’s– maybe a little experimentation will help you discover why your friends are raving about a wine you think is only so-so. After all, the three bears prove that even in a fairy tale not everyone likes things the same way.

Puglia, the boot heel of Italy, hasn’t always had the best reputation for wine-making. For many years, it was known primarily as a source of bulk wines for blending or making vermouth. However, driven by economic forces, this situation is changing and now more than half of the region’s wine is produced under Italian wine quality laws.

The traditional training system used in Puglia is alberello, where vines are grown as low free-standing bushes rather than in neat lines strung out along wires. This style of growing is naturally low yielding and well-suited to the climate in Puglia, but also labor intensive as most of the work needs to be done by hand rather than using tractors. It’s a combination that makes profits difficult when wine prices are low and, in recent years, many bulk producers in the region have opted to accept EU payments to “grub up” their vines and leave the business. Those remaining are increasingly focused on putting wine into bottles instead of tank trucks.

Nearly three-fourths of the quality wine production in Puglia is based on just two grapes: Primitivo and Negroamaro (also written as Negro Amaro). Their dominant position likely comes from the one thing they have in common– an affinity for warm, dry weather.

Negroamaro is a dark, late ripening grape that has been cultivated in Puglia for at least 1,500 years and many people believe even longer, perhaps as long as 2,700 years. One possible origin for its name can be translated as “blackest of the black”, and wines made from it typically exhibit black fruit flavors with savory spice and herb notes. Historically, Negroamaro has been used as a blending grape to add body to other wines (often in other parts of Italy, or even other countries), but it can also make a structured, age-worthy wine by itself. A native Italian variety, nearly all of the world’s production of this grape is grown in Puglia.

Primitivo, on the other hand, is an early ripening red grape that was brought to Italy from Croatia only in the last few hundred years. Its name means something along the lines of “first one”, and it is typically harvested starting in August. (Primitivo is also one of the few grapes that can have a second harvest in the same year, typically 20 to 30 days after the first.)  As discussed in Zinfandel’s Italian Cousin, Primitivo is a close relative of the much more famous Zinfandel, and it exhibits the same flavors in wine- red berries and jam with a touch of pepper.

Examples of what to expect from wines made with these grapes are provided by three products I represent from Consorzio Produttori Vini of Manduria, Italy. Detailed descriptions are provided below.

Consorzio Produttori Vini Memoria Primitivo di Manduria 2013: This unoaked wine preserves the light, bright berry flavors and hint of sweetness that are the hallmarks of Primitivo/Zinfandel grapes. Earth and pepper aromas mingle with scents of blueberries. A medium dark ruby color promises a lot of flavor, and the Memoria delivers with just enough structuring tannins to give the wine focus. An easy-drinking, pleasant wine that is great for cookouts.

Consorzio Produttori Vini Neama Salento Negroamaro 2014: Dark ruby with purple highlights, this wine has savory aromas of black cherry and herbs with flavors of black cherry and black raspberry, a touch of clove, and moderate tannins. Well suited to grilled red meats and vegetables, it matches up nicely with onion and garlic flavors and can also work with savory spicy foods. For something out of the ordinary, try grilled tuna steaks with grilled peppers and grilled eggplant.

Consorzio Produttori Vini Salice Salentino Riserva 2011: This is a versatile wine that can pair with a range of foods from the sublime earthiness of truffles to the simple pleasures of a meat lovers pizza. It has a moderately dark ruby color with enticing aromas of raspberry and plum augmented by hints of allspice and vanilla that come from its time in French oak. Delicious flavors of cooked cherry and raspberry combine with nice structuring tannins and notes of nutmeg and allspice– a complex mingling with a long, pleasant finish.  A local food match for Salice Salentino is Penne alla puttanesca (pasta with anchovies, onion, olives, tomato and capers). Foods with extended cooking times such as stews, roasts, and smoked meats are also good candidates to make the most of the layers of flavor in this wine.