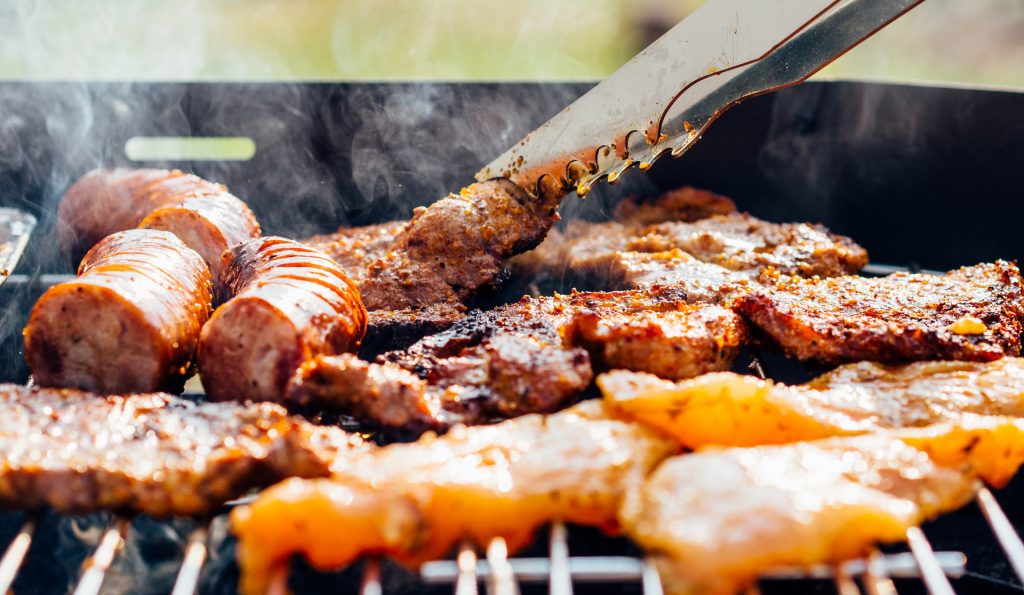 Memorial Day is fast approaching, and with it, in New England at least, the official opening of barbecue season. Oh, sure, most of us have fired up the grill once or twice already, perhaps even a few times, but this is the weekend that our summer cookouts really get rolling.

Barbecue season is a time for friends and family; a time for the exciting flavors of smoke and spice; and a time for big wines like Zinfandel or… its Italian cousin, Primitivo.

The similarity between Zinfandel and Primitivo came to the attention of UC Davis professor Austin Goheen during a trip to Italy in 1967.  Not long thereafter, ampelographers, experts who classify of grapevines by comparing the shape and color of the leaves and berries, declared the two varieties to be the same. In the early 1990s, the connection was proved beyond a doubt when DNA fingerprinting established that American Zinfandel and Italian Primitivo are in fact clones.*

Recently, I had a chance to perform a less scientific comparison involving two 2013 California Zinfandels and a 2013 Primitivo. The three wines were:

One sip was all it took to recognize the family resemblance. All three glasses were full of ripe berry flavors supported by spice and pepper notes. However, there were also interesting stylistic differences.

The Bedrock Zinfandel has to be considered a bit of a ringer. Containing nearly 23% of grapes other than Zinfandel (Carignane, Mourvedre, Grenache, Petite Sirah, Abouriou, Aubun, and assorted mixed white varieties), it possesses the kind of complexity that only a well-done blend can. Those other grapes may also be a factor in holding the alcohol content down to relatively modest (for Zinfandel) 14.5% while still delivering big time flavor. Bright cherry and raspberry aromas are accented by savory herb notes. Take a sip and you get all that plus blueberry and pepper flavors. This is a wine that will pair well with spicy foods that contain a hint of sweetness such as spicy BBQ pulled pork or coconut curry grilled chicken.

The second California entry, the Earthquake Zinfandel, starts out tight and herby– not nearly as welcoming as the other wines. However, give it a little time to unwind, about 30 minutes or so, and the wine reveals a rich ripe fruit core and solid structure framed by intriguing herb and spice accents. At 15.5% ABV, this is a powerful wine that can stand up to just about anything- I’d like to try it with BBQ beef ribs or chili rubbed tenderloin tips.

The Lirica Primitivo is a bit more restrained than its California cousins. A nose of spice, plum, and pepper gives way to flavors of pepper and raspberry with a quick touch of mineral on the finish. Lightly oaked (three months in French oak), this wine has a subtle complexity with moderate structuring tannins and nice length. The alcohol level, 14.0% ABV, is also a bit more restrained than the other wines. The laid back character of the Lirica makes it an ideal complement for things like grilled Italian sausages, spice rubbed pork, and grilled bacon wrapped jalapeno shrimp.

While each wine has individual nuances, they all have the signature berry flavors, spice notes, and jamminess that are a great match for everything from burgers and sausages to spicy BBQ sauces. So next time you want to invite Zinfandel over for a barbecue, don’t forget to invite the Italian cousin, Primitivo. You’ll be glad you did.

Note: My business represents the wines of Consorzio Produttori Vini.

One thought on “Zinfandel’s Italian Cousin”