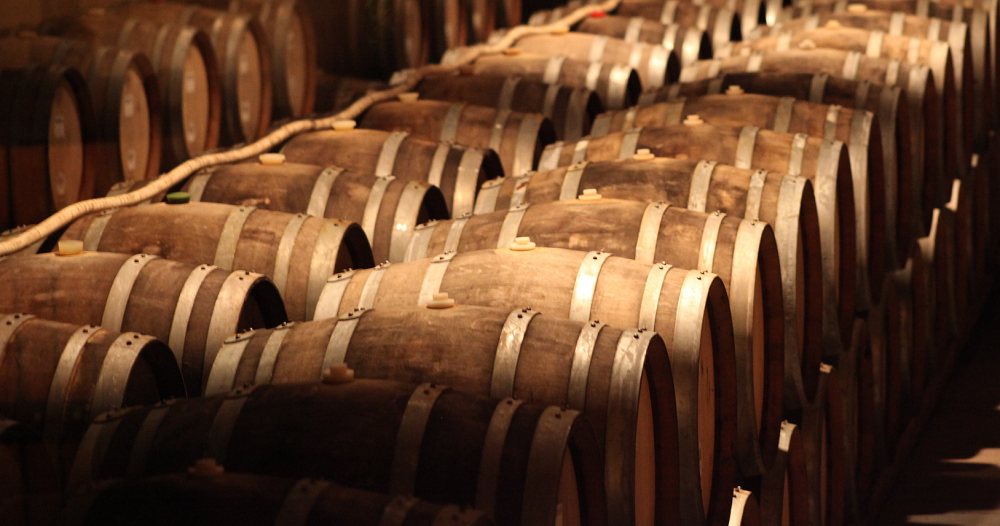 The original reason for putting wine into wood barrels was to make it easier to move. Amphorae and dolia made from clay were a proven solution for wine storage and could be transported reasonably well by ship, but their weight and fragility made them much less suitable for going any distance over land. The Mesopotamians are believed to be the first to use wooden barrels to carry wine. These were manufactured by hollowing out palm tree trunks, a time-consuming and expensive process, and their use did not spread outside of the Middle East.

Barrels of the type that we are familiar with today were invented by the Celts in northern Europe and spread through the region by trade. Their use with wine resulted from the Roman Empire’s expansion into central Europe. As the advancing legions ventured further and further from the Mediterranean coast, keeping the troops supplied with wine was a growing problem. When the Romans reached Gaul, they were introduced to staved barrels made from oak and fir that the Gauls used for storing and transporting beer*. Not ones to ignore a good idea, the conquerors quickly adopted the barrels for use with wine.

As they spread through Europe, the Romans carried their wine making traditions with them. Grapes flourished in many of the Empire’s new territories and, over time, the transport challenge became bringing wine from the provinces back to Rome. What the traders of the time soon discovered was that the wine shipped in oak barrels often arrived tasting better than when it had left the northern lands.

What caused this magic transformation?

Wine kept in wooden barrels is changed by two processes. One is direct contact between the wine and the wood, the other is limited contact with air through the sides of the barrel. Working together, these interactions enhance wine by reducing fruitiness, developing new flavors, providing structure, and adding texture.

A well-made wood barrel doesn’t leak, but it is still slightly porous. This allows a little bit of the wine to evaporate out and a little bit of air to come in. While too much air is bad for wine, a properly topped-up wood barrel allows just enough air contact to gradually dissolve oxygen into the wine, supporting chemical processes that help the wine to develop. These processes can do things like increase body, soften tannins, and create a rounder mouthfeel. The slow infusion of air into wine also helps stabilize the color of red wine, increase aging potential, and can even reduce vegetal characteristics such as green and leafy aromas.

The strength of these interactions is affected by barrel size, how much use the barrel has seen already, and how long the wine is aged in it. Barrel aging effects are increased by using smaller barrels, newer barrels, and longer aging times. The influence of the wood on the wine can also be magnified by fermenting in the barrel.

During the aging process, the contact with the wood impacts the wine most strongly in the first months, with a gradually decreasing the rate of change over time. After being used for aging two or three times, most of what the wood has to give to wine has been used up and the barrel is called ‘neutral’. It will still allow air to interact with the wine, gaining all the benefits of the gradual infusion of oxygen, but the wood will no longer add flavors or tannins.

The different factors that increase or decrease the effects of wood and air allow winemakers to plan an aging regimen that best matches the wine they are making. However, before exploring that it makes sense to review the different woods used in barrels today and what they contribute to the wine. That will be the topic for the next post is this series.

*In Commentarii de Bello Gallico, Julius Caesar wrote about another use the Gauls found for their barrels. During the siege of Uxellodunum in 51BC, the townsmen filled barrels with tallow, pitch, and dried wood then set them on fire, and rolled them down on to the Roman positions causing a great blaze. The Romans prevailed, though perhaps with a somewhat increased interest in barrel technology.